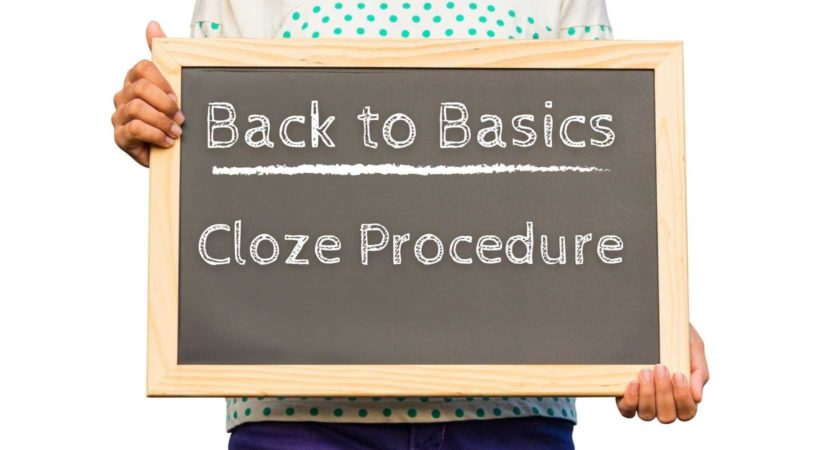 Back to Basics: Cloze Procedure

Welcome to our Back to Basics series! In this series we will be exploring some of the foundational methods, practices and terminology for teaching reading. This series is for those new to the field of literacy, beginning tutors or those who would just like a refresher. This week we are discussing the cloze procedure.

Cloze procedure, or cloze reading, is a teaching strategy that uses passages of text with missing words. The learner inserts the missing words using context clues and constructs meaning from the text. Cloze procedure can be used as an assessment technique, can help with reading comprehension, and can even be used as a studying technique. While simple in appearance, cloze is actually a sophisticated tool. By removing key words and using words in learners’ vocabulary lists, cloze forces the brain outside of the normal flow of reading. Instead, readers must “recognize the interrelationships of language and to develop an awareness of sequence, both of which could help prediction” (Cloze Procedure in the Teaching of Reading). Tutors use the cloze procedure to model problem-solving reading strategies.

The video below from LiteracyMidSouth offers a short introduction to cloze procedure.

Cloze was developed by a psychologist and actually started out as a readability test for texts in 1953. It was developed based on the Gestalt concept of “Closure.” Teachers quickly recognized its value and cloze has now developed into an effective reading assessment and strategy. Maze activities developed in the 1980s out of cloze. Maze also omits words but provides choices for the missing word.

Using the cloze procedure has many benefits for learners. Students must:

Check out the resources below to learn how to effectively use cloze and create your own cloze passages.

Back to Basics: Teaching Remotely

Learn how tutoring remotely can be a valuable experience for the learner and tutor.

May 17, 2022 Adult
Back to Basics Distance teaching

The Learner Variability Navigator is a free tool that translates research into learner factors and teaching strategies.