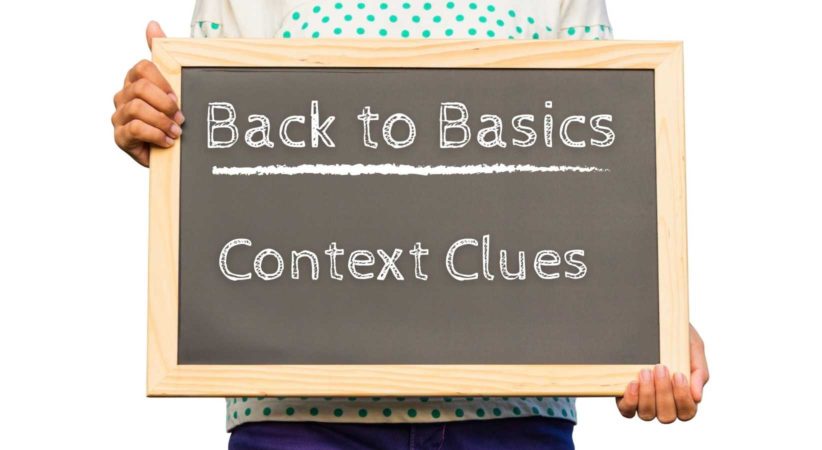 Back to Basics: Context Clues

Welcome to our Back to Basics series! In this series we explore some of the foundational methods, practices and terminology for teaching reading. This series is for those new to the field of literacy, beginning tutors or those who would just like a refresher. This week we are discussing using context clues to build vocabulary and increase comprehension.

Context clues use the surrounding sentence or passage to determine the meaning of a word. Often authors can leave hints as to the meaning of unfamiliar words in the text. Using context clues (or cues) can be thought of as a word attack strategy. It helps the reader from having to stop and look a word up in the dictionary. However, context clues are sometimes considered unreliable. It is not a deep enough strategy for learners to discover how to break the word down and learn the meaning behind the word consistently, unlike decoding strategies. Nonetheless, some tutors find that emerging readers learn most new words from context. Context clues are another tool for the learner’s toolbox.

There are four common types of context clues:

As a tutor, you may implement the strategy in several ways:

Watch the three videos below for examples of using context clues with adult learners.

While context clues do not replace word attack and decoding strategies, it is another helpful tool for learners to use to discover and understand new words.

Back to Basics: Sight Words

Welcome to our Back to Basics series! This week we are discussing sight words.

Back to Basics: Echo Reading

Welcome back to our Back to Basics series! This week we are discussing the fluency strategy of echo reading.

Are you teaching reading skills to adults at a distance? Would online access to reading materials at a variety of reading levels be helpful? Here are some of the places …