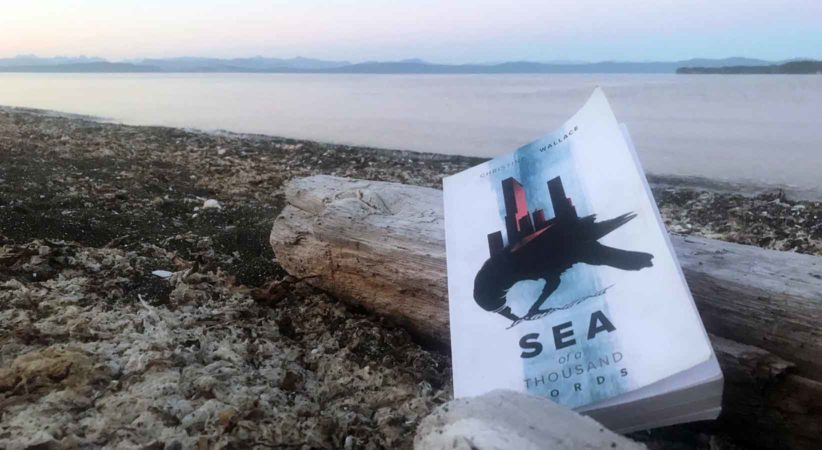 Diverging from my usual genre of historical fiction, I picked up a secondhand science-fiction book that is set in the near future, between 2022 and 2033. I live on a small Gulf Island, so what grabbed my attention was that the main character lives on a remote island in the Pacific Northwest.

Sea of a Thousand Words by Christine Wallace shows the dark possibilities of using biological weaponry to eliminate ‘undesirables’ – in this case, climate refugees who have fled countries that are no longer viable for human life.

Though fictional, I have the eerie feeling that the plot is not impossible. It’s action-packed – starting with a massive earthquake and tsunami that wipes out the Oregon coastline in 2022. By 2033, North America has closed its borders, citizens are micro-chipped and a security organization is more powerful than governments. First Nations people in remote communities are, so far, exempt from micro-chipping, and live in traditional ways.

On Haida Gwaii, Dot, the story’s heroine, discovers a shipwrecked scientist who must bring evidence to ‘New’ Seattle to reveal the security company’s secret plot. As the scientist, Dot and her friends (which include an orca and a raven) kayak and sail through Hecate, Queen Charlotte and Johnstone Straits, it was fun to recognize BC communities like Skidegate, Bella Bella, Quadra Island, Texada Island, Richmond, Tsawwassen and more. The author also weaves Haida language and culture throughout the story. As Wallace says in her dedication page, “One cannot tell a story about our future without first understanding our past.”

Other bonuses in this book: many strong female characters, a map, and inside the author signed “To others who find their muse in the raven. Christine Wallace, May 19th 2019.”

Keeping a summer theme of BC, sci-fi and the sea, Emily St. John Mandel’s Sea of Tranquility is up next!

Recruiting literacy educators and tutors can be challenging. Check out these tips and resources to help.

Do you know about child poverty in BC? Read First Call’s 2020 BC Child Poverty Report Card to learn the facts.

Today is International Literacy Day! This year’s theme is Literacy teaching and learning in the COVID-19 crisis and beyond, with a particular focus on the role of educators and teaching …