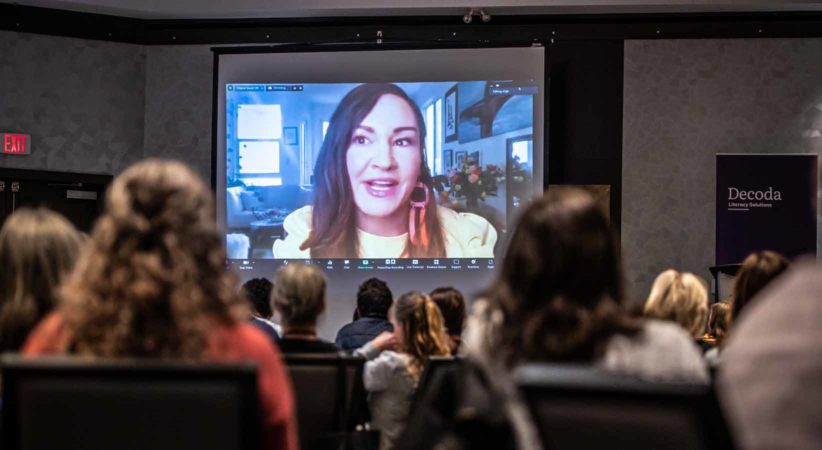 CBC journalist Angela Sterritt was a keynote speaker at the 2022 Decoda Literacy Conference.

CBC journalist Angela Sterritt, from the Gitanmaax community of the Gitxsan Nation, has been working to reduce stereotypes and fake news about Indigenous people through her stories for two decades. In 2021, she won an Academy Award (Canadian Screen Award) for best reporter of the year in Canada for her coverage of an Indigenous man and his 12-year-old granddaughter who were arrested while trying to open a bank account at BMO.

As a keynote speaker at the Decoda Literacy Conference in May 2022, Angela shared her insights on media literacy and Indigenous realities literacy, how our brains are wired to believe stereotypes and fake news, and what we can do to overcome our biases.

Stereotypes and deep fakes in the media

“A lot of the stories that we see today, still, they’re laden with stereotypes,” she said. “Or there are quotes within them by people who are not Indigenous, who don’t come from a lived experience as an Indigenous person, and within that there are inaccuracies about Indigenous people living in the stereotypes that we would like to see them in.”

“I want to ask you to think about: what does it mean when an entire group of people, thousands of people, are posited not as they are – who they are, how they live, our land, our history, how we’ve been treated – for more than a century.”

“One of the most powerful types of fake news that’s been projected on Indigenous people are stereotypes,” she said. “You believe these fictions about Indigenous people or about fake news, not because you’re not intelligent, but because the information itself has been skewed. But more importantly, we’ve been actually hard-wired to believe what we want to believe, regardless of the facts. That’s why fake news is so prolific and so successful.”

We all have confirmation bias

“We are drawn to these stories because they are sensational or salacious, but we’re also drawn to stories that align with our points of view,” she said. “Psychologists have called these tendencies confirmation bias. And that’s something that is very critical when we’re talking about what we know and what we understand about Indigenous people in this country.”

Confirmation bias, also known as identity protective cognition, is a survival mechanism that protects us from ideas that could affect our tribe. “Because we are highly social beings, it is more important to us to protect our values and our relationship with friends and family, than it is by adopting a new set of beliefs.”

Angela said there is no way to defeat the confirmation biases we have in our heads, but there are some steps we can take to get around it.

She shared a Navajo proverb: ‘You cannot wake up a mountain that’s pretending to be asleep.’

“That’s a really excellent analogy of the information we’ve been provided in Canada where we’ve pretended or we’ve hidden the fact that we’ve done terrible things to the original inhabitants of this country, to Indigenous people,” she said. “I truly believe that one of the most important ways to really tackle this is to self-reflect.”

She suggests these three steps to help ‘re-wire’ our brains:

Recognition of our biases and of Indigenous realities through research and compassion are steps toward dismantling stereotypes and building equality.

“In a world, in a society, in a country where we literally have the colonized and the colonizers to this day, we can’t be pretending or believing that we’re coming to the table as equals,” she said. “We’re coming to the table with the settlers or colonials up here and the Indigenous down there. So, you can’t pretend that we’re on an equal footing, and somehow if we treat everybody the same, that we’re somehow going to get to the same place. That’s just not true.”

Compassion is the key to understanding and changing our viewpoint.

“I think we really need to leverage our compassion in this world. Imagine if we treated everybody with an understanding of where they’re coming from, historically, intergenerationally not just as an individual who is somehow just a Canadian by virtue of being here.”

Through compassionate storytelling in her writing, her Reconcile This column, her Land Back podcast and a new book, Angela shines a light on Indigenous realities to bring truth and to help to dismantle biases, stereotypes and inequalities.

“It’s been a lifelong goal to attempt to turn the tides, to attempt to address some of the inaccuracies, but also to try to build compassion in people. That’s something that I talk about a lot in my book, Unbroken, coming out in September, which is about missing and murdered Indigenous women and building compassion for their stories.”

Learn more about Angela Sterritt and her media on her website.

Decoda Literacy Solutions is BC’s provincial literacy organization. We support community-based literacy programs and initiatives in over 400 communities across BC by providing resources, training and funds.

Literacy matters to me: Gwen’s story

When Gwen came to Canada from China in 1954, she was 22 years old. She was a young mother who needed to support her family. Gwen worked long hours at …