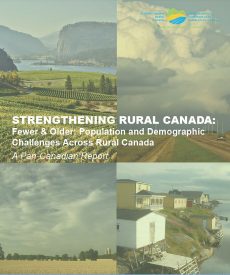 Strengthening Rural Canada was a pan-Canadian initiative examining how demographic changes have impacted rural and urban areas in four Canadian provinces, namely, British Columbia, Newfoundland and Labrador, Ontario and Saskatchewan. The focus has been on the following four population groups:
1. Total population;
2. Francophone population defined as individuals whose mother tongue is French;
3. Aboriginal population defined by Statistics Canada as persons who reported identifying with at
least one Aboriginal group, that is, North American Indian, Metis or Inuit, and/or those who reported
being a Treaty Indian or a registered Indian, as defined by the Indian Act of Canada, and/or those
who reported they were members of an Indian band or First Nation;
4. Immigrant population defined as persons who are, or have ever been, landed immigrants in
Canada.

This report combines the findings of studies from the four provinces.

Learning Without Borders: an Introduction to Community-based Adult Literacy in British Columbia

Learning Without Borders is an introduction to the complexities of the adult literacy field in BC. It surveys its history, explains some of the challenges, provides a glimpse of the …

Tips to improving communication with the media

This PR toolkit is a step-by-step guide for working with media in communities.  Designed for community literacy organizations in BC, it contains tips, tools and guidelines for working with the …

This is a calendar of literacy-related dates to remember in 2023. This year we are also offering a digital edition of the calendar. Subscribe on your Google, iCal or Outlook …