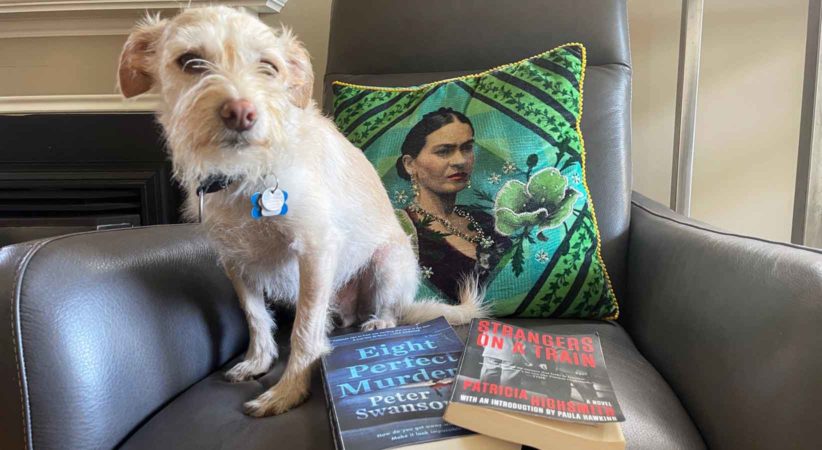 Murder summer by Stanley the dog

I like to listen to my humans discuss books. Usually, they stay in one room. It saves me the trouble of trying to herd them. Some of their words I understand. Good. Get it. Page-turner (only kidding). This summer, they spoke lots about murder.

The first time was about a book called Eight Perfect Murders by Peter Swanson. The book is about the owner of a bookstore, who years ago created a list of eight hard-to-solve murders from classic mystery novels. One day, an FBI agent visits his store and tells him about a murderer on the loose. The killer is copying murders on his list.

My humans liked the book. But what interested them most is that the book mentions Strangers on a Train by Patricia Highsmith. It is a story about two men who meet on a train. Both have people in their lives who they wish were dead. One proposes that they swap murders. The theory is that the police would never connect the two strangers to the murders.

They had only seen the 1951 movie version by Alfred Hitchcock. Having read Eight Perfect Murders, they learned the book has a different ending.

Join us every Wednesday in July and August, and learn about the Decoda staff’s summer reading picks.

Do you know about child poverty in BC? Read First Call’s 2020 BC Child Poverty Report Card to learn the facts.

November is Financial Literacy Month and we’re providing you with a list of resources to help learn and teach.