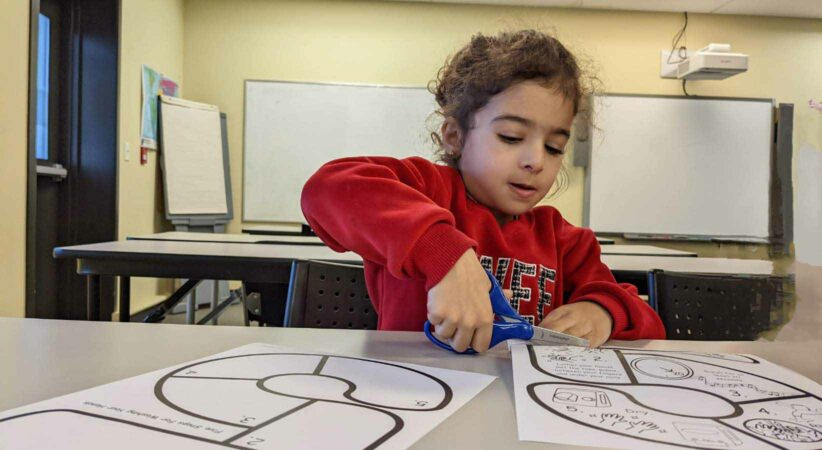 Families new to Canada face a new language, culture and school system. Mothers with young children may be isolated at home, with few opportunities for English language practice, early literacy development or connections to other families. And they worry that their child might be behind their Canadian peers when they begin Kindergarten.

Decoda Literacy Solutions’ family literacy program, Parents as Literacy Supporters in Immigrant communities (IPALS), is designed for parents and pre-school-aged children to support their language and literacy development. It focuses on learning through play.

“Through interactions in English and their first language, it offers parents new strategies to support their child’s learning in fun and interactive ways, while responding to their cultural and linguistic needs,” says Aliza Dhungana, IPALS program manager at Decoda. Aliza develops and provides training, materials and ongoing support to IPALS programs across British Columbia.

Ghadir Kishawi is a multicultural facilitator who has been working with IPALS programs in Nanaimo since 2017 and in Victoria since 2020. She translates all the learning materials to Arabic and facilitates online IPALS programs. She knows firsthand what it’s like to start a new life in a new country, and the difficulties children might have when they begin school.

When she came to Canada from Palestine in 2011 and enrolled her daughter in public school, she would attend class for an hour each day, sitting beside her daughter to translate.

Now Ghadir helps other parents learn how to teach their children through IPALS’ playful, hands-on activities – so their children are better prepared to go to school.

“I work with moms from many different countries, and many don’t know the concept of teaching their child at home. IPALS provides this concept and resources. They learn how to spend time with their child through talking, playing and sharing chores.”

Literacy skills include math and numeracy, and Ghadir says early math skills are involved in almost every IPALS session. “There are lots of sessions about sorting, counting and patterns. Even when we’re learning the alphabet, we’re learning about upper case and lower-case letters, and we sort them. We made playdough, so we measured the flour, water, salt and food colouring. Then they made shapes from the dough. We introduced hygiene topics, and even this relates to numeracy. They plan a bedtime routine like: at 8 o’clock we put on our pajamas, at 8:15 we brush our teeth. Children learn how to plan time and be responsible. It’s all math!”

This year, IPALS programs and families can celebrate Family Literacy Week with the theme “Make it count! Play * Sort * Measure” with activity sheets for all ages.

IPALS has meant a lot to two Syrian refugee families in Nanaimo.

Hanan Abed arrived in Canada in 2017 and learned about the IPALS program through the Central Vancouver Island Multicultural Society. She attended online Arabic/English IPALS with her daughter Masa in 2021, then an in-person IPALS program in 2022.

“I liked that the program had different activities and we learned new skills and strategies to use with children,” Hannan said. “It helped her make friends and she knows letters, shapes and colours – I think she is ready for school!”

Heba Aldakkak came to Canada in 2016 and has participated in IPALS three times. Once with her son, and twice with her daughter Lillian.

“My daughter loved the program,” said Heba. “At the beginning she was very shy, but after that she started to participate and wait for the sessions. She liked talking to other kids and drawing with them. She learned the letters of her name and the five senses. She also gained new skills like using the scissors and making crafts. She can now differentiate between healthy and junk food.”

Ghadir has seen many successes come from the IPALS program.

Decoda Literacy Solutions supports IPALS programs held at 18 sites in BC communities and school districts with the funding support of Immigration Refugees and Citizenship Canada (IRCC) and other sources.

The program runs in several Lower Mainland school districts, as well as Kelowna, Nanaimo and Victoria, in languages based on the local population’s needs, including Arabic, Cantonese, Farsi, Karen, Korean, Mandarin, Punjabi, Somali, Spanish and Tigirnya.

Since 2008, IPALS has helped more than 3000 families from 46 countries and 35 different language groups.

The Westcoast Reader has a new website and Paulina Mason’s picture is on it! Paulina invited us to share her story about adult literacy – she wants to encourage others …