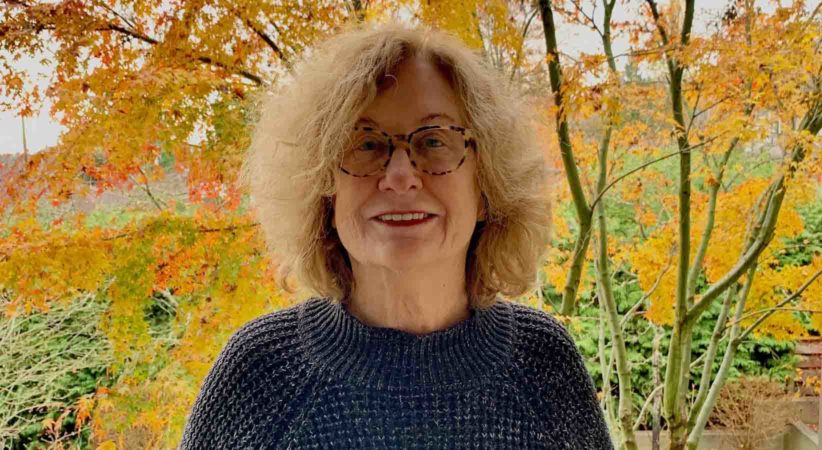 Joan Acosta was The Westcoast Reader’s editor for 27 years.

When Joan Acosta left Guatemala at age 16 to attend high school in the U.S., she couldn’t foresee that her future would be publishing an easy-to-read Canadian newspaper that would help English language learners and many others for four decades.

As The Westcoast Reader (The WCR) celebrates 40 years in publication, Joan talks about the rewards of — and awards for — producing Canada’s longest running newspaper for learners.

During that time, Joan was the paper’s only employee, and her passion repositioned it from an unknown, unfunded trial to a provincially funded, trusted resource for a wide variety of people and programs.

From learner to teacher

Joan was educated at the University of California, Berkeley, then spent time in West Africa in the Peace Corps, where she developed an interest in teaching English. When she couldn’t find an easy-to-read newspaper that simplified real, current news stories, she developed her own learning materials.

Later, with a TESL Certificate from San Francisco State University, she taught ESL (English as a second language) to high school students in Ontario. She encountered the same issues — how to find relevant news stories that were written in plain language? Again, she developed her own materials to support student learning.

“For such a long time, there was a need for current materials written at a level that ESL and literacy students could read,” she says.

In 1979, she moved to BC where she was an English as an additional language (EAL) instructor at Capilano University for 17 years and where she began her journey in print journalism.

A resource for English Language Learners

The Westcoast Reader (initially called The Westcoaster) newspaper got its start in 1980 after a group of ESL teachers at a BC TEAL (Teachers of English as an Additional Language) conference discussed the need for current reading materials, at beginner reading levels, for their adult students.

A year later, when the editor resigned, Joan was recruited through her role at Capilano University.

The WCR with its large print, shorter sentences and news in plain language, was a hit with readers, teachers and tutors.

Producing and funding a nonpartisan newspaper

Joan says that current news and human-interest stories were always of most interest to adult learners.

“We were lucky we had built a relationship with the local newspapers — The Province and Vancouver Sun. With their permission, I adapted stories and used their photos.”

Beyond the huge task of producing an entire newspaper on her own, Joan also had to find and retain funding on a regular basis.

“We didn’t have regular government funding. I had to make a lot of requests and apply for small grants. Some years I could only afford to run four issues instead of eight,” she says. But as the newspaper built a reputation among both teachers and learners, “the government saw the value in continuing to fund the paper.”

She also championed the paper’s autonomy, ensuring a nonpartisan news source as government leadership shifted through the years.

Joan also spent several days a month visiting classes, to help teachers learn to use the newspaper and resources to teach reading strategies and support learning. Each issue of The WCR comes with teachers’ notes, that include exercises, activities and quizzes — which Joan also created. These tools mean less prep work for the teacher and more time with students.

During these visits, she found that she learned a lot about what teachers and students need, and about who the learners were.

Joan discovered that the audience for an easy-to-read newspaper was even larger than she had imagined. She was surprised to find that even healthcare practitioners were recommending The WCR.

She once visited a Vancouver rehabilitation clinic that recommended The WCR to stroke patients.

“A man in his 80s who was highly educated, and used to read newspapers cover to cover, told me that he loved The Westcoast Reader,” said Joan. “Never in my wildest dreams did I expect that! After his stroke, he found that regular newspapers were overwhelming, and the words seemed to run together. The WCR allowed him to keep up with the news in a way that he could digest.”

Best of The Reader

Joan retired from The Westcoast Reader in 2009, but her passion and dedication to adult literacy continued.

“The president of Capilano University, Dr. Greg Lee, who was a huge supporter of The Reader, told me that he thought it would be important to leave a ‘legacy’,” she says.

So, she created a series of 15 e-books based on favourite stories from The Westcoast Reader over three decades, plus a teacher’s guide, all available for free on her Best of The Reader website.

The ebooks are categorized under topics like Canada, Canada’s Indigenous Peoples, Families, Recipes, Sports, and more. Each has 8-10 stories plus related exercises and activities.

“It’s a resource that readers and teachers can tap into at any time.”

Over the years, Joan received numerous awards for her work on The Westcoast Reader, Best of The Reader, several books, and her contributions to adult literacy, including:

1987, Leaders of Readers Literacy Award from Family Circle magazine and the Council for Periodical Distributors

2007, Council of the Federation Literacy Award for lifelong commitment to improving literacy skills in BC

Today, The Westcoast Reader is published by Decoda Literacy Solutions in partnership with Camosun College, with financial assistance from the BC Ministry of Post-Secondary Education and Future Skills. It has a print and digital distribution, additional online stories and a social media presence.

When Decoda first adopted The WCR production in 2016, they asked Joan to help with the first issue!

“We were so grateful for Joan’s assistance and experience on that first issue, and all her support since then,” said Margaret Sutherland, Decoda’s executive director. “The Westcoast Reader team at Decoda strives to keep the paper as relevant and successful as Joan did for so many years.”

Joan continues her work as a clear writing and design consultant, maintains the Best of The Reader website, and still connects with Decoda Literacy Solutions from time to time to consult, teach or attend the biennial Decoda Literacy Conference.

Every gift has the power to impact lives

Decoda’s director of fund development builds relationships to support literacy and BC.