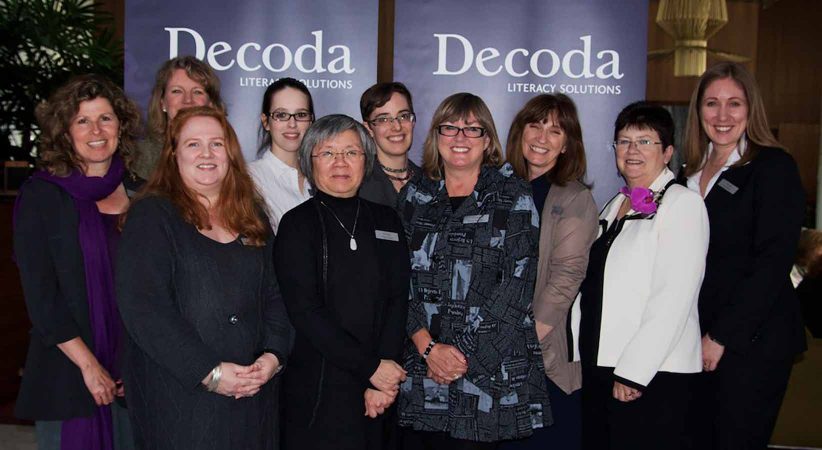 Celebrating a decade of working together for literacy

When Decoda Literacy Solutions officially launched on May 30, 2011, it brought together the rich history and experience of two literacy organizations and many field experts.

“It was an exciting time,” says Decoda’s executive director Margaret Sutherland, who at that time was a regional program manager for the Columbia Basin Alliance for Literacy (CBAL). “We had Literacy BC’s years of experience in adult and family literacy and Literacy Now’s community-based approach to planning for literacy across the lifespan.”

Decoda’s first executive director Brenda Le Clair remembers the launch party in Vancouver, where “all sorts of important people came for speeches and a lot of good will. People who were cheerleaders of both organizations were there, everyone together.”

Brenda explains the Literacy Now project’s beginnings in 2003 and its connections to the 2010 Winter Olympic Games in Vancouver.

“The Deputy Minister of Education said, ‘I want you to change the way literacy is thought about – in a way that will impact every community in BC.’”

Brenda and a team of literacy experts from diverse areas of the province and from a cross-section of education levels met regularly and researched literacy models.

“We knew it needed to be community led and driven,” said Brenda.

In the late 90s, Leona Gadsby and Jennifer Cliff-Marks developed a family literacy model that used community literacy coordinators to connect with local organizations in the Columbia Basin and Boundary regions.

“We felt it was important for all the community agencies to think about how to integrate literacy,” Leona says. And after successfully pilot testing the model with 16 community literacy coordinators, they formed the Columbia Basin Alliance for Literacy in 2001.

Bringing the model to BC communities

Over the next several years Brenda and others brought the model to communities throughout BC.

“We built this understanding, smart team who knew what communities needed,” she says. “We gave them a process and some guiding principles. Their plans came in and we trusted that they knew what was right for their communities.”

“I visited every corner in the province and worked closely with the local literacy outreach coordinators,” says Fiona. “It was a magical time because there were endless possibilities.”

Fiona retired in 2012 as Decoda’s Director, Family Literacy and Early Learning, though she continues to provide guidance and support for Decoda’s IPALS program, which has grown from six sites to 19 sites in BC today.

“It’s very inspiring, that all this work continues with LOCs today,” says Fiona. “I’ve seen things come and go, but this has sustained. Life-changing work is happening in communities.”

Each year, they added new communities, until by the time of the 2010 Olympics they had 102 literacy outreach coordinators, reaching over 400 BC communities.

“It’s really important to have a provincial organization like Decoda,” says Leona, who retired as Decoda’s Director of Programs and Services in 2016.  “It can be hard to get started and know where the resources are. It provides a pilot light and support for all the literacy organizations. It provides guidance, resources and the overall view of literacy in BC.”

Roots in Literacy BC

Meanwhile, the Literacy Now team was also developing a relationship with the existing provincial nonprofit literacy organization, Literacy BC (est. 1989), which supported adult and family literacy programs, advocacy, research and resources with the help of regional literacy coordinators connected to the province’s 16 college regions.

“The province needed one strong literacy organization – each organization had something vital to bring to the table. Literacy BC Executive Director Judy Cavanagh helped us see our strengths and opportunities, and how we could be a part of building the new organization.”

“Essentially the Literacy Now project funded communities to organize and animate. To create a literacy plan for their own community and that wasn’t done on the back of volunteers. LOCs were the answer.”

Today Diana is a Decoda Literacy Board Member. “Without a doubt, it has become the literacy organization that we wanted it to become.”

Along with Diana, Literacy BC’s library and librarian Tina Chau also transitioned to Decoda. Today the Decoda literacy library has grown to more than 5000 resources and is an important support to literacy practitioners and British Columbians.

Ten years later, with funding from the Province, Decoda still supports 100 LOCs planning for literacy and coordinating literacy programs and services in more than 400 BC communities.

Brenda retired from Decoda in early 2017 but she continues to follow the organization she helped to conceive.

“Every year it is stronger. The work from both groups carried on. What I see from Decoda’s history is really great people in the organization and on the ground in communities. People’s lives change because of this work.”

Connecting for literacy at Decoda Conference